Synthetic motor oil is heavily advertised. We see the ads for it everywhere, which all say that synthetic oil lasts longer and will protect your engine better than regular oil. But synthetic is also noticeably more expensive, so it’s not always an easy choice.

The following guide will outline the primary differences between conventional and synthetic engine oil to help you weigh the added benefits of synthetic oil against its higher cost and determine which you should use for your vehicle.

What is Conventional Oil? 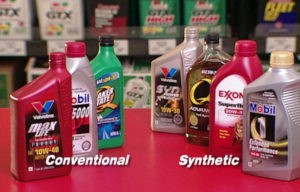 This is the original engine oil. Refined from crude oil, a natural resource, conventional oil has been used for over a century to keep vehicles running reliably.

You will see oil referred to by its ‘weight,’ which might seem a strange way to refer to a liquid that is sold by the quart. But ‘weight’ simply means viscosity, the ease at which a liquid will pour or flow at certain temperatures.

Viscosity ratings are standardized worldwide, and multi-weight oils have numbers such as 5W-20, 10W-30, 10W-40 or 20W-50. The first number is the oil’s viscosity at 0 °F (-18 °C), an engine’s cold/winter starting temperature. The lower the number, the thinner the oil/easier it flows.

What is Synthetic Oil?

Some types begin with a base of conventional oil (which is refined from crude oil), which is then chemically modified in a factory. Others are artificially manufactured from completely different raw materials.

Synthetic motor oil includes a variety of additives that distinguish it from conventional. The types and amounts of additives used determine its performance characteristics. Additives such as conditioners are used to help your engine’s neoprene oil seals remain pliable and flexible under the intense heat they operate in to help prevent oil leaks. These are commonly found in formulas designed for high mileage cars.

Synthetic can better withstand chemical breakdown under heat and load. High end performance vehicles and European makes such as Mercedes-Benz typically require full synthetic engine oil because of the superior protection it provides.

What is Synthetic Blend?

As the name implies, a blend is a mix of synthetic and conventional. It’s a compromise. They are formulated to give extra protection for engines that operate under heavier loads and run at higher temperatures. They also evaporate less easily, which reduces oil loss and helps to increase fuel economy.

Synthetic blends are a good choice for pickup trucks and SUVs. You get higher load protection, at a lower cost than full synthetic. 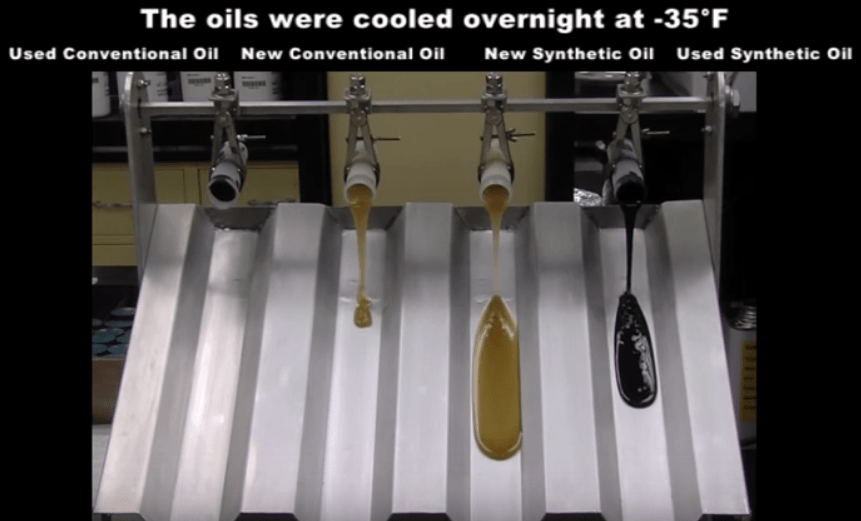 Lasts Longer – It also generally lasts longer than conventional oil, meaning less frequent oil changes. Its molecules resist breaking down at high temperatures better, which protects your engine when it’s working hard under high operating temperatures. In general, it can safely be used for up to 7,000 miles.

Costs More – Synthetic (and its special filter, if specified by the manufacturer) will usually cost about twice as much as conventional oil and a normal oil filter. On average, an oil change with conventional oil might cost $25 to $55, and if using synthetic, the price will be $45 to $70.

Most modern conventional motor oils contain some percentage of synthetic which is one of the reasons why they are so much better than in years past.

Check out our guide of the best conventional and synthetic engine oils.

Is Synthetic Motor Oil Better for Your Car?

Is it Worth it?

If you are currently using conventional engine oil, changing it on schedule, and your vehicle’s manufacturer doesn’t require it for your engine, we recommend to continue using conventional. However, if you routinely exceed the recommended service intervals (many people do) than it is probably worth switching to synthetic.

Likewise, if you routinely make short trips where the engine never fully warms up, conventional won’t get hot enough to burn off moisture and other contaminants and byproducts of combustion. That’s not good – switch to synthetic.

If you live where there are extremely cold winters or very hot summers or you tow a trailer or boat or haul heavy loads, synthetic would be a better choice.

In summary, many people get their money’s worth out of using synthetic. That said, be careful with extended oil change intervals. Many cars never have their hoods opened or fluid levels checked between services. So if your car starts to leak oil, or consume it, the oil level could become dangerously low without you even noticing.

Refer to Your Owner’s Manual

Your owner’s manual will specify the correct engine oil rating for your car and how often you should replace your oil and filter. Modern engines burn very clean, and oils are of much better quality, so service intervals have increased over time.

A rule of thumb for conventional motor oil is to change the oil and filter every 3,000 to 5,000 miles, or four months (whichever comes first) for typical commuter use. This is a debated topic, but it’s better to err on the safe side when it comes to protecting your engine. Oil is cheap compared to an engine overhaul.

We’re interested to know – what what type of oil did you use for your last oil change: regular or synthetic and why? Let other readers know by leaving a comment below!

1 thought on “Synthetic vs. Regular Motor Oil – Which Should You Use?”